Outline of the Issuance and Circulation of Banknotes and Coins

The Bank is the sole issuer of banknotes (Bank of Japan notes) in Japan. It conducts various operations to ensure the stability of banknote supply and to maintain public confidence in banknotes.

The Bank of Japan Act stipulates that the Bank issues banknotes.

Banknotes are a widely used payment instrument, especially for small-value payments. The Act stipulates that banknotes shall be used for payment as legal tender, in other words, they are a legally defined payment instrument that should not be refused by any creditor in satisfaction of any debt.

Financial institutions bring their excess banknotes to the Head Office or branches of the Bank and have their BOJ accounts credited. When banknotes return to the Bank, they are withdrawn from circulation.

The Bank and financial institutions serve as bases for banknote circulation, to ensure that banknotes circulate throughout the country.

As a result of examination, banknotes judged to be unfit for recirculation are shredded to the size that cannot be restored to the original shape and end their life as banknotes. The average lifespan of 10,000 yen note is four to five years. In contrast, that of 5,000 yen and 1,000 yen notes is one to two years since they are more frequently used and therefore tend to worn out quickly.

The Bank exchanges damaged or worn banknotes for new ones at its Head Office or branches.

In order to prevent counterfeiting and altering, banknotes are incorporated with many security features. To address counterfeiting on a global basis, the Bank actively exchanges information and conducts joint studies with foreign central banks. 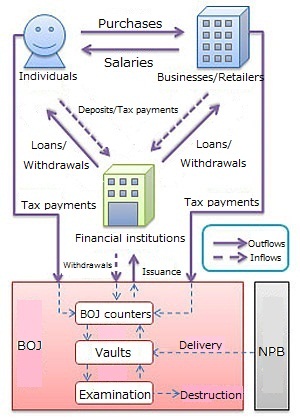 Coins are issued by the government. Coins are minted by the Japan Mint, which is an incorporated administrative agency, and are deemed to be issued when they are delivered to the Bank.

Coins, the same as banknotes, are put into circulation when BOJ account holders withdraw them from their accounts at the Bank.