What do negative inflation risk premia tell us?

The inflation risk premium (IRP) is often explained as compensation required by bond holders for bearing inflation risk, which takes a positive value. In fact, however, the IRP takes both positive and negative values. This fact is theoretically clear. The sign of the IRP is known to be determined by a correlation between investors' expected inflation and their intertemporal rate of marginal substitution (Campbell et al., 2009). Concretely, if the correlation is negative, the IRP is positive, and vice versa. Meanwhile, we do not necessarily need such an explanation based on the capital asset pricing model (CAPM) when deriving the sign condition for the IRP; we can derive it from more general assumptions. The purpose of this article is to explain the IRP in a more concise and intuitive manner.

What are inflation risk premia?

Figure 1. Components of the nominal rate of interest 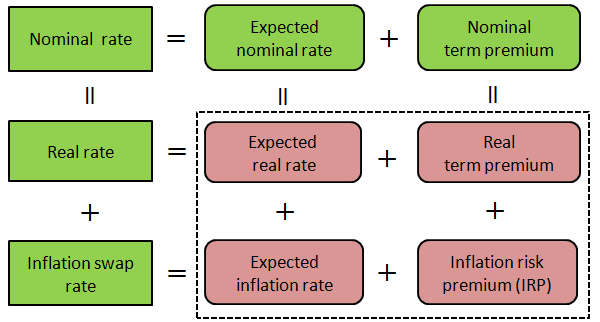 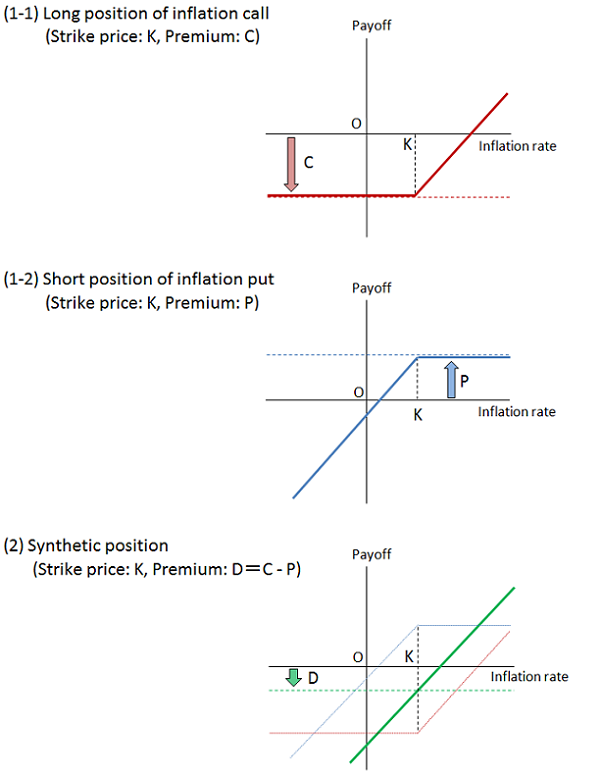 Note: The expected inflation is assumed to be K. The figure shows the case of C > P.

The IRP can be extracted from nominal and real yield curves using a term structure model. This article presents estimation results based on Imakubo and Nakajima's (2015)(PDF:610KB) term structure model, which takes account of the zero lower bound constraint of nominal interest rates. Figure 3 shows the estimated components of 10-year nominal rate in Japan. Despite the upward pressure on the nominal rate due to a rise in the expected inflation and IRP, a fall in both the expected real rate and the real term premium has contributed to the stable and low nominal rate since 2013. While the expected real rate is basically influenced by market views on the current and future monetary policy stance, the real term premium generally reflects the real-term interest rate risk as well as various other factors including the central banks' policy actions (Bernanke, 2013). The recent fall in the real components appears to reflect the Bank of Japan's quantitative and qualitative monetary easing (QQE) program, which is in effect present in the interest rate market through both a commitment channel and a term premium channel by purchasing long-term government bonds.

Figure 3. Real and inflation components of the 10-year nominal rate 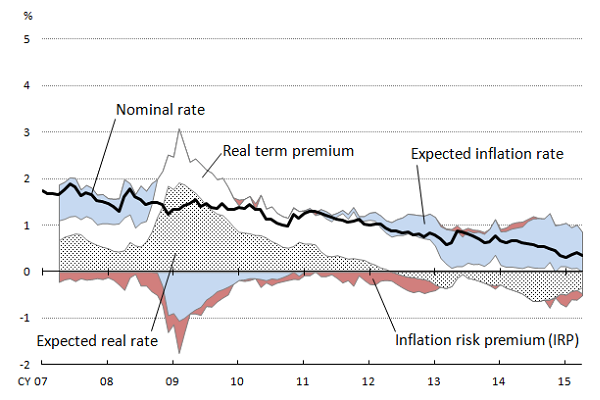 Note: The direct effects of the consumption tax hikes on the inflation swap rate are eliminated prior to the analysis. 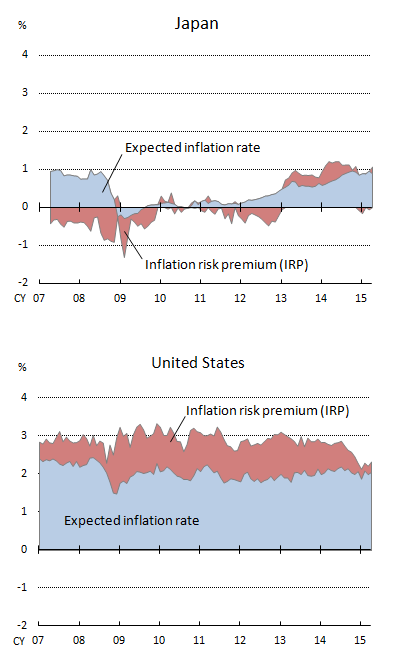 The other feature is that the IRP remained negative over a period of time. In Japan, the medium- and long-term IRP basically remained negative from before the Lehman shock until the end of 2012. The situation up to the end of 2012 suggests that market participants were strongly concerned about unexpectedly lower inflation than the market average of inflation expectations, i.e., the expected inflation of zero percent. In other words, they were concerned about the possibility that they might face negative inflation. In contrast to the negative IRP that Japan experienced, the U.S. IRP was constantly positive in this period. According to Garcia and Werner (2010) and Joyce et al. (2010), the European IRP was also positive.

If so-called "deflationary concerns" can be characterized by not only the expected inflation of zero percent but also the negative IRP, it was 2013 when market concerns about deflation clearly started to fade. While the medium- and long-term expected inflation kept gradually rising, the corresponding IRP, which was negative over a period of time, turned positive. Subsequently, both the rising expected inflation and the positive IRP have continued against the backdrop of the Bank of Japan's "price stability target" -- 2 percent in terms of the year-on-year rate of change in the consumer price index -- and QQE program. Although the expected inflation has not yet reached the price stability target of 2 percent, market concerns about the downside risk of inflation have steadily weakened. Interest rates in Japan seem to have started reflecting the upside risk of inflation as in the U.S. and European economies.

The views expressed herein are those of the authors and do not necessarily reflect those of the Bank of Japan.